Padma Shri awardee Shri Sudarsan Pattnaik today unveiled a unique sand sculpture at the Puri beach to commemorate HCCB’s announcement of planting 25 lakh trees to celebrate 25 years of its inception. HCCB (Hindustan Coca-Cola Beverages), incorporated on February 14, 1997, operates pan India and is the country’s largest pure-play beverage company. HCCB started its drive to plant 25 lakh trees at a major event near Chennai today, where 10,000 saplings were planted by thousands of volunteers at Alamathi village in Thiruvallur district of Tamil Nadu. The plantation campaign will soon reach Odisha, where the company targets to plant at least 1 lakh trees. Pattanaik’s sand sculpture celebrates this movement by depicting plantation as an antidote to rapidly depleting natural resources. The sculpture also pays tribute to the UN mandated International Day of Forests, observed on March 21.

The sand art depicts two hands nursing a tree to cuddle and protect Mother Earth. It signifies that the fate of our planet rests in our hands, and it is upon us to keep the Earth green and nourished. Just one sapling planted by each of us is already a significant amount of carbon emission mitigated, rainfall captured, oxygen generated, wildlife sustained. 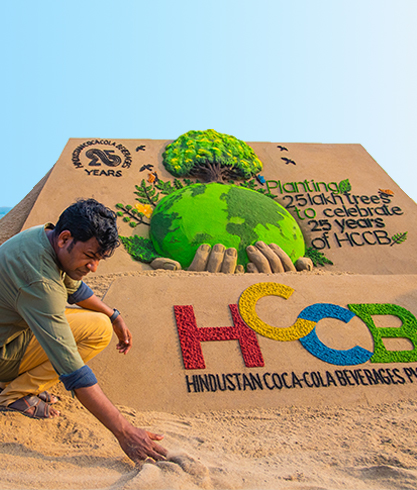 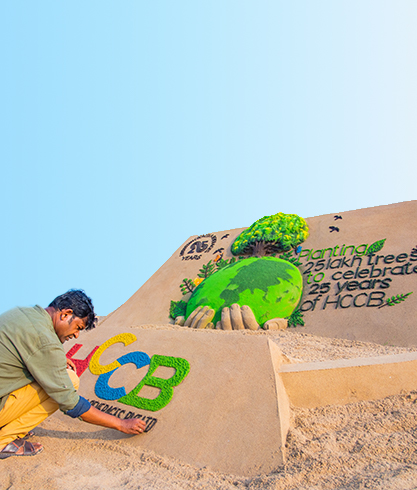 Thanking Shri Pattnaik,  Kamlesh Kumar Sharma, Chief Public Affairs and Communication Officer, HCCB, said, “When we were deliberating the various ways of celebrating our 25th anniversary, our employees proposed that we create a carbon sink and draw an ambitious plan to top up the 50% green energy usage that we already leverage. We gave ourselves the challenge of planting 25 lakh trees! It is heartening how so many partners have already come forth to help us realize the ambition. In equal measure is the magnanimity of all the people who are cheering for us. On behalf of HCCB, I extend my regards to Shri Sudarsan Pattnaik Ji for capturing our commitment and for being a part of HCCB’s journey”

Speaking about the sand sculpture Pattnaik Ji said,“I congratulate HCCB on its 25th anniversary. I welcome this idea of planting 25 lakh trees to celebrate a major milestone. This is also reflective of the way HCCB is preparing for the future. It is a powerful message that needed to be spread far and wide. I would urge all of us to plant a sapling on occasions important to us.”