Most people saw it coming days ahead, but few could have imagined the full impact of the national lockdown that followed the outbreak of COVID-19 across India.

For most FMCG companies including Hindustan Coca-Cola Beverages (HCCB) the challenge was particularly daunting. Thousands of cases of beverages crisscrossing the country every day, on the back of an extensive manufacturing and supply chain, powered by thousands of 3rd party resources, is anything but a simple process. COVID-19 proved to be one massive spanner thrown into this complex machine. Despite the lockdown, the demand for beverages had to be met and the jobs of 3rd party resources protected. Water and juices would still have to be made available, perhaps more than at most times, for a lot of people had also begun reporting at hospitals. All this while following government guidelines restricting the movement of people, vehicle and stocks.

For the Business Shared Services team (also referred to as GIC or Global In-house Centers in some quarters) at HCCB, it was a particularly challenging moment. This team managed a 300 strong Tell-Sell team at National Sales Center, who would report to work every morning in North Bengaluru and interact with thousands of distributors, retailers, several hospital chains, local markets, key accounts, daily.

The viability of the distributors and the retailers and those making these calls, depended on the transactions that resulted from this daily routine. 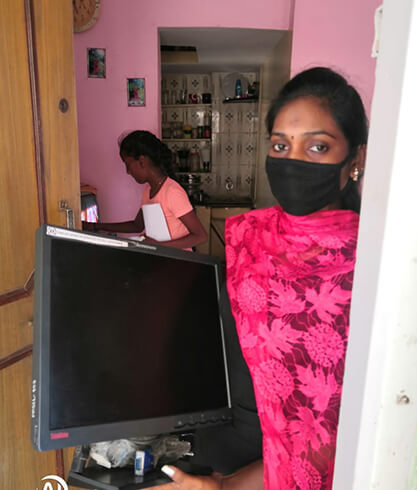 In the weeks ahead, when the state government in Karnataka had begun to impose restrictions on people attendance and when the national government had tested the viability of a national #jantacurfew on a Sunday, the Business Shared Services (BSS) team had already planned to halve the size of the team reporting to work. The lockdown meant that nobody would report to work – a loss of not just their incentives, but potentially their jobs.

For Rahul Ligade, Associate Vice President, BSS, who is the leader of the Tell-Sell team, it was a particularly challenging moment. All these tele-callers employed by HCCB’s partner Cogent E Services, worked on desktops, laced with sophisticated systems and software. Moving this team to work from home meant the backend IT systems - hardware, advance autodialing telephony system - would have to be reconciled too! “We had never tried anything like this before”, says Rahul.

For the Tell-Sell team to work from home, three things were essential -- laptops, mobile phones and the internet. The biggest challenge among these was finding laptops for rent. Laptop rental market was beginning to see orders in thousands and most outfits were not interested in taking small orders. Even the few that potentially would, did not have the machines that met the specifications.

Some rapid quarters covered and many negotiations post, the hardware was available. And now it was turn to offer them to the Tell-Sell center employees. That was the only way they could continue with their routines and earn their salaries. While each laptop was worth as much as their monthly salary, a little ingenuity and some outside the box thinking made these employees owners of a laptop. HCCB offered to pay the monthly incentives owed to the National Sales Center employees a little ahead of its due date, which could then be used as down-payment for the machines, and the rest would be paid as monthly installments. Many of them took the offer and became owners of a laptop. A similar arrangement was made with a leading telecom company to provide SIM cards with enough bandwidth to handle voice and data. All this in real quick time!

With employees working from home, the next challenge was to find an alternative call routing system. In five days, all the necessary hardware including laptops and a few desktops were shifted to the respective houses. The NGUCC auto dialing system was put in place to route calls smoothly to individual phones. The entire thought process was changing and what we considered was not possible suddenly seemed possible.

Once the hardware and digital requirements were taken care of, the team had one more challenge to overcome. “By the time we got the backend systems working, we realized the customer profile too had changed,” says Tanmay Agarwal, Vice President, BSS and Rahul’s Manager. Regular F&B customers were forced to shut shop but the nearby grocery stores – small and large – had sprung to life. There was a new base of customers like pharmacies who wanted to stock water and juices. “We also found there was a lot of demand for these products from housing colonies and resident welfare associations that were front-ending large apartment complexes across the country,” he adds.

Since the new customers were outside the company’s customer directory, outbound calls were now replaced by inbound ones. This meant that HCCB had to manage the orders coming in, instead of filling the order book by reaching out to the standard base of distributors and retailers.

The Tell-Sell team had to change their timings and script, to cater to the new reality. “The first thing we did was to start virtual training for the 150-odd people within the Tell-Sell team on how to talk to customers, with a modified script. This also meant imparting soft skills, particularly listening skills and a deft handling of any possible emotions,” adds Gaurav Raizada, National Manager, Tell-Sell, HCCB.

Further, around 20 of the 60-member team who used to handle customer complaints were also trained to take orders. “The big idea was not to push for more business. Instead, with reduced orders in the market it was important to keep everyone involved, keep the team morale high and to provide a sense of normalcy to these team members,” says Gaurav.

The situation today is still far from normal and is expected to remain challenging until the lockdown is completely lifted. But there is a silver lining here too. The last few weeks have brought several cross-functional teams closer, enabled a better understanding of each other’s work in the company and save the jobs of these Tell-Sell employees. Above all, team members from across the company believe that nothing is impossible. COVID-19 has truly been a test by fire.

Soch Foundation is the most unique foundation that teaches how to earn and Recycle money. We want to provide basic requirements to each and every needy person so that they can survive in this world. https://www.thesochfoundation.in/